After a weekend of valuable networking and a day topped by the big debate between Rick Schwartz and Frank Schilling, I wasn’t sure it could get any better, but it really did. First of all, I’ve got to say the breakfast at the Ritz that was served each day was really good. I don’t usually eat a good breakfast, but fueling up for a day of information influx is the best thing to do!

Going to breakfast on Tuesday was extra special, because once it was finished, anybody in the room had the opportunity to give a two-minute elevator speech about any product or service they were offering.

As the room was completely filled, it was a no brainer to take advantage of the situation, so I pitched my recently launched website Hosted.org, which is an online forum and resource created to review hosting providers (see the Web Hosting Reviews tab), as every website in the world is HOSTED! Several others also took advantage of the situation, including Victor Pitts (see below), who pitched ABOVE.com, which is currently holding a Silent Auction for TRAFFIC Names that ends on October 31st on Halloween!  Don’t be scared, get bidding! 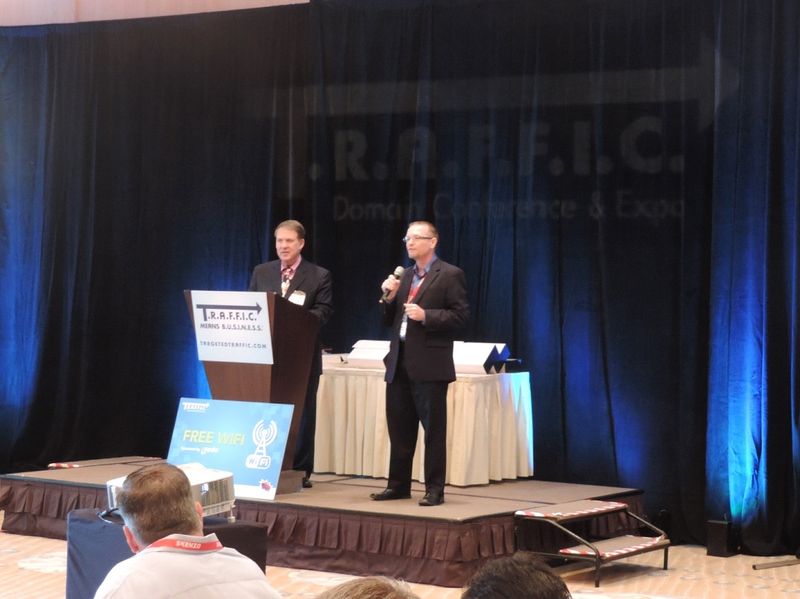 After the elevator pitches came Ron Jackson’s State of the Industry talk. Ron was chock full of good news to report, and the room was completely full to hear what he had to say.  I don’t want to steal any of Ron’s thunder, so I’ll simply say that most will be very happy with his next report, as the trends are all really positive and picking up steam. I do recall Ron stating that this was the best and most exciting report he’s been able to give in several years and stated that based on all of his time doing what he does with DNJournal, he feels that this industry is bouncing back and should see significant continued growth in the coming years.  Having gotten there early on Saturday, I had the distinct pleasure of chatting with Ron (and his lovely wife) on several occasions.  A true professional devoted to his craft and very deserving winner of the Best Domain Blog of the Year!  Congratulations Ron! 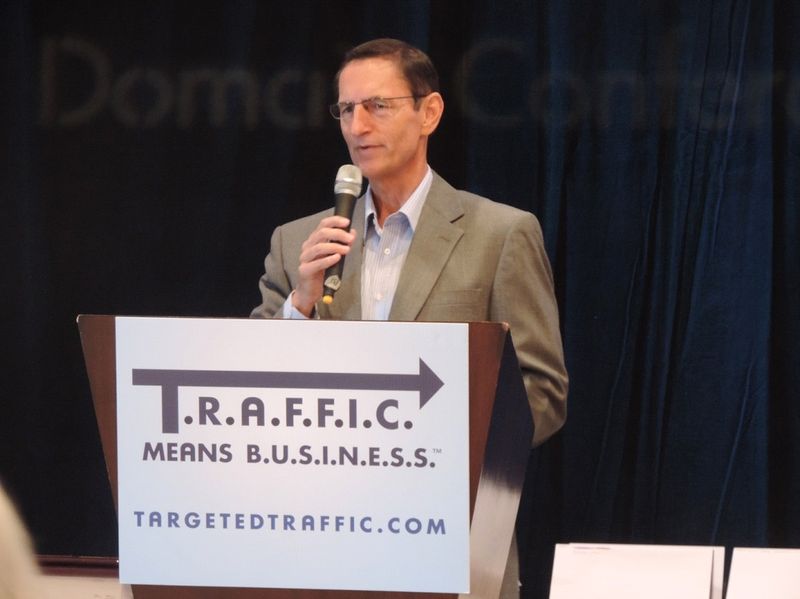 Next was the 10th annual T.R.A.F.F.I.C. Awards, which was really cool to be part of, especially having had voted.  I had a great time Tweeting out the awards live as they were announced and I like to thank those who followed and retweeted the information. Also a thanks to AcroPlex/DomainGang (Theo), Andrew at DomainNameWire.com, Elliot Silver of DomainInvesting.com and others for the shout-outs!  A big thanks to Ray Hackney to, for letting me be a writer here!  Anyway, if you haven’t seen the winners yet, you can check out my tweets! 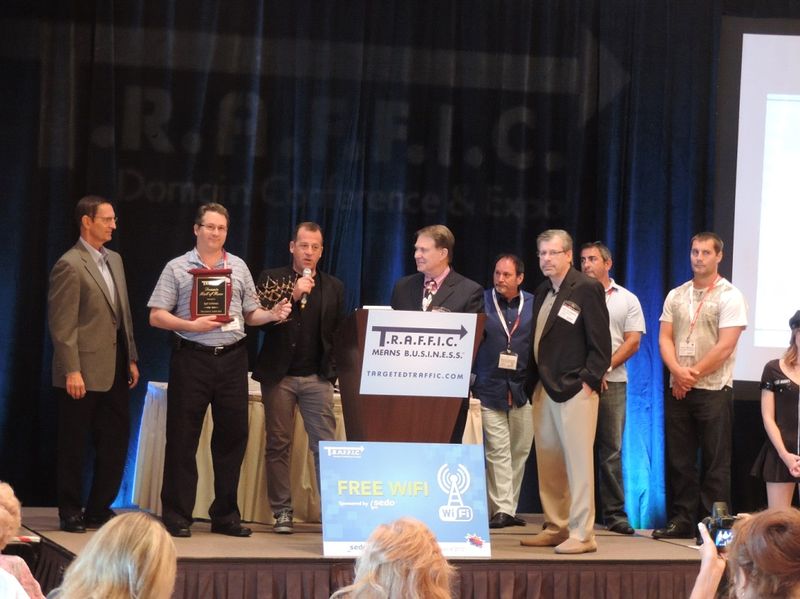 The first session held on the second day of T.R.A.F.F.I.C. was a State of the Industry chat from domainers and brokers perspectives. The panel provided a lively and informative discussion with Gregg Ostrick, Lonnie Borck, John Ferber, Bill MuClure, Ammar Kubba (still in his robe by the way) and Tessa Holcomb of Igloo. This was an excellent session providing some real insight and opinions as to what is going on today and what is expected for the near future.  Howard Nue did a terrific job asking probing questions to the panel, before it was opened up to the audience.  Again, walked away with some great bullet points and information for some future posts to come. 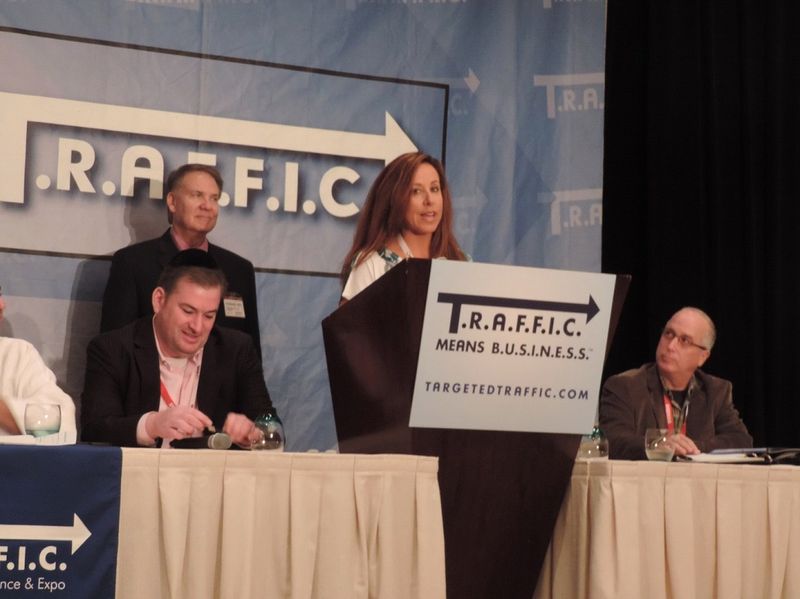 Next up was a really a lot of fun to watch, the DomainSherpa.com Five, Live! If you are new to domaining or still are not carving out success. You are probably buying the wrong names. Take some time to visit DomainSherpa.com and watch this very informative and educational video series.  Michael Cyger gathered a list of domain names from conference attendees and the Sherpas provided their critiques on each of the twenty names gathered. Ammar Kubba, filling in for Page Howe, won the always fun “Registered Or Not” game, although Adam Dicker made it close!

Another great networking lunch followed and I made sure to site with different people each and every chance I got, in order to hear and learn their stories, advice and input.  I came armed with many questions and everybody was open, honest and very friendly.
The final session was the Meeting of the Chiefs, with host of players including Paul Nicks from Godaddy, Gregg McNair from Igloo.com, Donny Simonton of Voodoo.com, Michael Gilmour of ParkLogic.com, Andee Hill of Escrow.com, Victor Pitts of Above.com, Joe Higgins of RookMedia.com, Adam Dicker of DNForum.com and Ammar Kubba of Aftermarket.com.  This was one of the most interesting sessions of the conference, as these industry insiders shared some very interesting insight into where the market is actually at.  Some big takeaways reveal a consensus that the DNJournal.com reported sales probably only represents ~10-15 percent of total sales, which is an astounding fact, if it’s true.  Based on comments offered by Andee Hill and Greg McNair, after considerable persistent probing from audience member at the time, Rick Schwartz, it is very apparent that there have been several sales a bit higher than sex.com, which was thought to be the highest domain name sale out there.  As Michael Berkens reported, Andee Hill was quoted as saying “We close domain sales for more money in a week than what others are reporting for the year”.  Besides this incredibly exciting information, great advice was provided by several panelists, which is sure to get some of the audience on the right track. 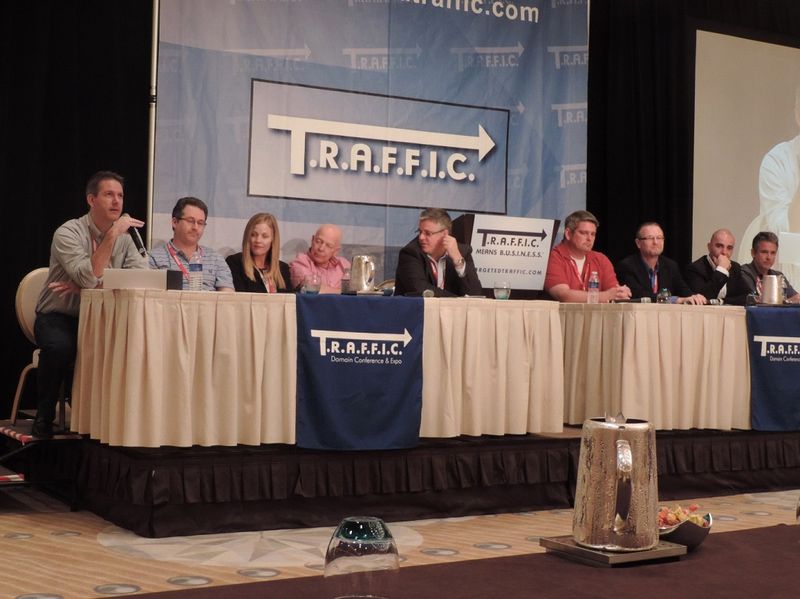 Meeting of the Chiefs

After a nice dinner on the historic Las Olas, yet another networking opportunity was provided at the Closing Party and Celebration. I still had a handful of people that I hadn’t had the chance to chat with, but that changed, as the environment was very inviting for domain talk and everybody made themselves very available. My guess is that I had a chance to talk with at least 60 percent of the entire crowd during this conference, which I found to be incredibly valuable, even if many of the attendants were service providers. They all know something that I didn’t, but know a lot more now.

I recall Ron Jackson’ s post at the last T.R.A.F.F.I.C. conference regarding the Safe Travels Breakfast, which was certainly worth attending. Having one final chance to confirm follow-up meetings and actions, solidified plans to move forward and leverage the relationships made and the discussions had over the conference. It was really to cool to leave the breakfast with everybody knowing my name and receiving positive comments regarding these posts, including from Ron Jackson, Rick and Howard. 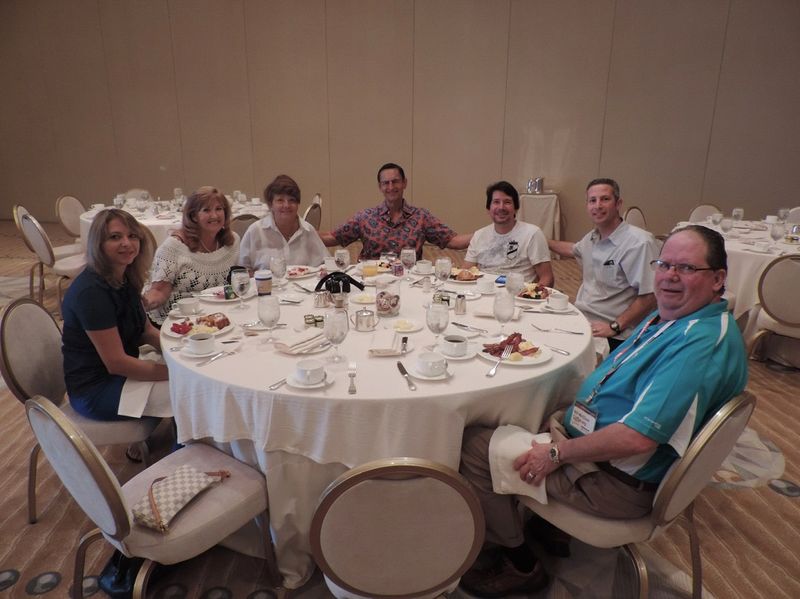 Not sure if I can head to Vegas yet, but this certainly will not be my last T.R.A.F.F.I.C.  Nor will it be my last post regarding this year’s event.  My posts so far have been a summary of events that occurred.  My next post will provide some real insight as to what I got out of the conference and why I will go again.  It will also cover things that I think could be improved on, as nothing is ever perfect. Stay tuned and thanks for reading!