It’s no surprise for those who have been involved with .tv that Tuvalu wants more money. The contract with Verisign is up at the end of this year and Tuvalu is putting the contract up for bid.

Kieren McCarthy over at TheRegister.com delves into some interesting clauses around the rebid.

Kieren reviews the controversial terms that were in the .CO rebid from last year.

Tuvalu is going down a similar path it seems.

Requirement 2.15 of the .TV registry request for proposal (RFP) reads:

Transition. Describe your plan for the transition-in of services, including processes, resources, approach and timeline. Include experience transitioning at least 5 TLDs, and at least 5 ccTLDs, with at least 3 transitions of TLDs over 1 million domain names. (Upgrading or migrating from one platform to another inside a company does not count as a transition).

Kieren notes, Similarly, the requirement that a company has transitioned “at least 5 ccTLDs” makes little or no technical sense. The result is a bidding process that likely only one particular applicant can hope to win, and all others are excluded.

GoDaddy confirmed to Kieren that they are bidding, they would not make any other comments on the process or the requirements.

The article is an interesting read as Kieren breaks down the other possible players and who wanted this clause added to the RFP.

This site uses Akismet to reduce spam. Learn how your comment data is processed. 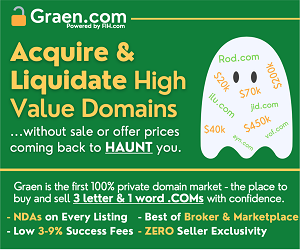