Interest seems to be heating up in the domain market for NFC and Mobile Payment type domains.

NFC stands for Near Field Communication,Wikipedia on the subject: 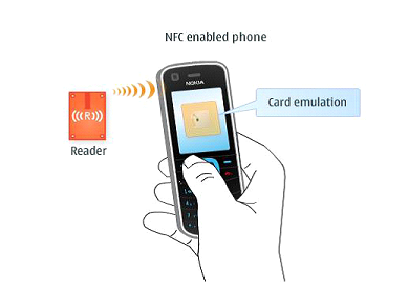 Near field communication (NFC) is a set of standards for smartphones and similar devices to establish radio
communication with each other by touching them together or bringing
them into close proximity, usually no more than a few centimetres.
Present and anticipated applications include contactless transactions,
data exchange, and simplified setup of more complex communications such
as Wi-Fi.[1] Communication is also possible between an NFC device and an unpowered NFC chip, called a "tag".[2]

NFC standards cover communications protocols and data exchange formats, and are based on existing radio-frequency identification (RFID) standards including ISO/IEC 14443 and FeliCa.[3] The standards include ISO/IEC 18092[4] and those defined by the NFC Forum, which was founded in 2004 by Nokia, Philips and Sony, and now has more than 160 members. The Forum also promotes NFC and certifies device compliance.[5]

NFC builds upon RFID systems by allowing two-way communication between endpoints, where earlier systems such as contactless smart cards were one-way only.[6] Since unpowered NFC "tags" can also be read by NFC devices,[2] it is also capable of replacing earlier one-way applications.

NFC devices can be used in contactless payment systems, similar to those currently used in credit cards and electronic ticket smartcards, and allow mobile payment to replace or supplement these systems. For example, Google Wallet
allows consumers to store credit card and store loyalty card
information in a virtual wallet and then use an NFC-enabled device at
terminals that also accept MasterCard PayPass transactions.[7] Germany,[8] Austria,[9] Latvia[citation needed] and Italy[10] have trialled NFC ticketing systems for public transport. China is using it all over the country in public bus transport[citation needed] and India is implementing NFC based transactions in box offices for ticketing purposes.[11]

Uses of NFC include:

Now like with any new emerging technology there can be a lot of excitement around it, that excitement tends to spill over into domain registrations.

The most popular space on the net to discuss NFC domains and the whole wireless payment sector is a thread at Namepros. Started in Dec 2011 there have been over 1200 posts in the thread.

The thread is broader than just NFC, its about all types of mobile payments and online wallets. Popular keywords for this genre include: Tap, Wallet, NFC as the prefix to a keyword, and some other brandable variations.

The mobile space is growing fast and there is no doubt its a hot topic. Investing in domains you need to stay on top of the trends because a lot of times one standard wins out over another, betamax vs vhs in the old days, Blu-Ray over HD DVD recently. HD DVD domains are pretty much worthless.

The same scenario can play out in the mobile payments arena just how it did in the consumer electronic arena.

There has been a lot of talk about the Isis launch. Isis is a mobile payments service that utilizes NFC technology. Venture Beat however recently did an article this week stating:

"it’s tough to muster much excitement when the core technology
behind Isis, near-field communication (NFC), almost seems more like a
fantasy today than when it was a hot mobile payments buzzword years ago.

Perhaps it’s because we’ve seen legitimate mobile payments solutions launch and thrive without NFC. Take Square’s mobile wallet app, which you can use to pay for purchases with your phone without the need for NFC hardware. Even PayPal has been exploring alternative methods of mobile payments with its point of sale solution.

Most damning for NFC are the major partnerships both Square and PayPal have recently landed. Square’s teaming up with Starbucks
to entirely replace the coffee shop’s credit card processor, and its
app will also work with existing Starbucks scanners at the register
(again, no need for NFC). That deal also led Starbucks to invest $25
million in Square.

PayPal, meanwhile, just announced a partnership with Discover, which would bring PayPal payments to more than 7,000 Discover merchants in the U.S."

Here is an interesting story for those interested in the space. The tale of two iPhones one NFC equipped the other not. It looks at how Apple could take control of the mobile payment space.

Taken from the article:

Right now it’s the best of times for mobile payment companies, with new
ideas and startups cropping up what seems like daily.When and if Apple
announces NFC-equipped iPhones, it might become the worst of times.One
of the big iPhone rumors (don’t worry, it’s not a stylus) is whether or
not Apple will go “all in” on the payments game. It’s set itself up
pretty well with its Passbook app,
which is designed to store all kinds of information from plane tickets
to loyalty cards, but not optimized to let consumers actually complete
the act of paying for something.

It’s a cautious, “wait and see” approach that is actually quite smart
of Apple — it can sit back and watch while startups like mine
cage-match it out to become the top mobile payment network. And as Apple
often does, it can choose to arrive at the cage-match with a stun gun.

Let’s look at a world where the next iPhone has NFC, and one where it
does not. What will happen to the rest of the mobile payment ecosystem?

Read the article to see how the two scenarios play out, with or without NFC.

As a domain investor you need to know your stuff here and have the
technological background to really understand what is going on. If
Square and Paypal are gaining traction without NFC, then may NFC will
end up like HD-DVD. Let me say I am not saying that has already happened
or will happen, but its another point a domain investor must be aware
of. Technology changes fast and some standards win over others. On top
of that consumers usually don't think of tech in its technical name,
they relate to brands. So you want to have the top generic category
defining domain, not a long tail that is also the technical term that no
one outside the field will use.

I think its an exciting space and mobile applications and usage will only continue to grow. There will be some winners and I especially like good brandables using the keyword Tap and some of the wallet keywords like onlinewallet or mobilewallet may be big winners. Domain investors should look to own one or two great .coms in the space and not register 100 mediocre or bad domains. I don't think the longtail in this niche will win too many times.

Stay on top of the news in this space and best of luck to all who invest.