I had two conversations over the weekend with domainers that talked about how they believed Frank was the man to follow, but then in the same conversations they said that the new tlds would flop. 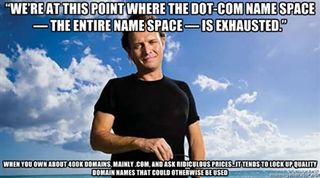 Schilling. Frank certainly has been a leader and a pioneer in the domain space. When Frank started his blog at SevenMile.com it instantly became must read material. The popularity of the blog and the number of people who took to Frank's words was nothing short of Rock Star proportions.

Frank has gone on to start one of the best and exclusive parking services in the industry. Customers say they are making more with his InternetTraffic.com than they were with previous parking solutions.

Frank wrote on his blog about .com first and foremost.

While nothing lasts forever, .com has had about as good a run as any product, service or thing can have. If you look at the last 25 years or the last 3 for that matter you could have made no better investment than to buy the right domain name and hold it for development, resale or traffic monetization. In the last few years there have been many domain registrants who came out of nowhere and created thriving development businesses. There have been folks who orbited the domain space and did not do well a few years ago, who have finally found their groove now – and there are established players who have taken a tumble, a dressing down.  Dollar for dollar, there are few business which are open to any comer, with any personal or educational background where such an individual can thrive so brilliantly, as they can in the domain name business. That has not changed.

So what of the people who don’t make it in the domain name business? Why doesn’t everyone win?  Whenever I go to social gathering, eventually someone comes out of the woodwork after a glass of wine or two, to admit they have tried their hand at recreational domaining. “I just couldn’t get any traffic to reallyaveragename.com” or “After 6 months of working with terribledomainname.org I just gave up”..  or worse yet, “I just registered thispatternname-2, thispatternname-3, 4, 5, 6 and it’s only a  matter of time before a big company comes knocking to buy them!”. There is an art to the domain name business that you either come to learn, or you don’t.  It’s not about computers and science.  As I’ve said before; we are all in the human behavior business, and there are few domain names in existence, just a few million across all extensions, which are good enough to provide their owner a tactical advantage when selling products and services on the Web.  My absence from blogging and reflection about the domain name business over the last few years has sealed my conviction in that belief.

If you are going to get into the domain name business, you need to get the best names. The best names are not always the most obvious but they are ALWAYS in demand whether the economy is good or bad. The price of these names keeps rising as more people learn about them. If you don’t know what names are good, then ask somebody who does, take a straw poll.  Jon Peters was a successful producer who never read anything.  He couldn’t focus so he had others read for him. That didn’t stop him from becoming one of the most prolific producers of all time.  You don’t need to know what a good domain name is to be a successful domain registrant.  You need to understand people and how they think. If you don’t know what constitutes a good name, ask your friends or family.

In a 2008 article titled "Domain Names New and Old Everybody Sells" Frank wrote:

The supply of meaningful and generic domain names is tight as a drum today. In an effort to increase revenues for itself and to simultaneously ease that demand, ICANN plans to start entertaining proposals for new namespaces in about a year’s time. I predict this will do little to quell the desire for meaningful .com, net and CC TLD names. Corporate IT departments overwhelmed by the task of managing existing .com typos simply won’t be up to the challenge of managing a corporate GTLD such as .COKE or .IBM.  Even with the help of a presently absent killer app from the likes of Godaddy, Enom or Tucows such sideshows will be an uphill push in a recession year. If my hunch is correct then .web .blog and other new .extensions will come to pass and they will marginalize the .info, .us, .eu, .asia and .mobi namespaces just as those namespaces relegated .ws and .cc to obscurity before them.  I predict that .com and other established namespaces will continue to thrive with some very minor marginalization at the fringes . The failure of former would-be contenders such as .travel, .biz and .pro to satiate demand for coveted names, shows us that adding more skim milk to the mix will not stop the cream from rising, and that cream is .com.

In his latest post "Lady Gags and New Tlds, Why Google has Assured Their Future"

Frank left comments like the following to one commenter:

***FS*** .COM has taken root a long time ago. I think that this is it’s high-water mark. Every major brand will have it’s own TLD in a decade. .com is great today because the brands reinforce it. It remains to be seen if that will continue in a .ANYTHING world. I think this has the potential to be a defining moment online, not a flash in the pan. .COM will indeed always be the king of TLDs, in an SLD world – but it will be marginalized on the whole by every new string that gets delegated. FB made a huge mistake missing generic TLDS. Not everyone will want .FACE when they get around to applying for it.

So Frank has changed his opinion but I speak to a lot of people that, 1) still idolize him and 2) Think the new tlds will flop. They are firm in their admiration for Frank and still believe he is "the man" but are in a complete disagreement with his new ideology. Over time it remains to be seen who is right, but it might be time to get on another train for those who are now diametrically opposed to Frank when it comes to .com valuations and the new tlds.